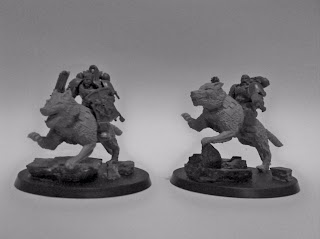 Here are some WIP pics of my Thunderwolf Cavalry. These guys are riding resin wolves from MaxMini in Poland, which I bought in 2010, well ahead of the release of the 'proper' models. As it's now 2012, you can appreciate it's taken a while for me to get round to building them, magnetized arms and all! 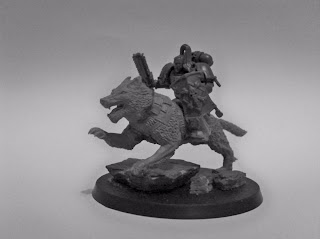 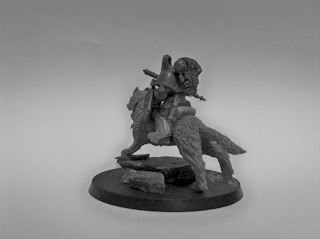 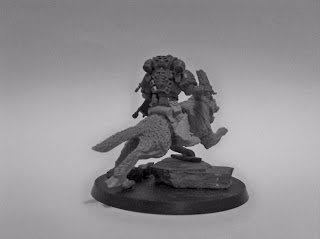 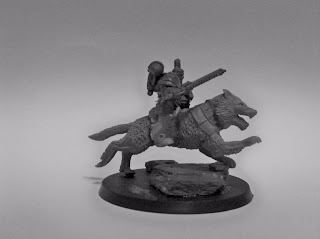 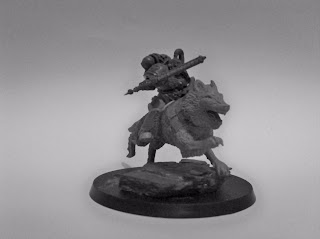 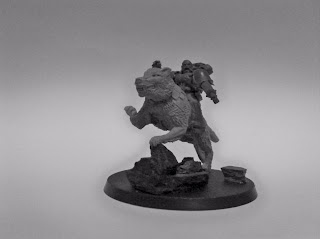 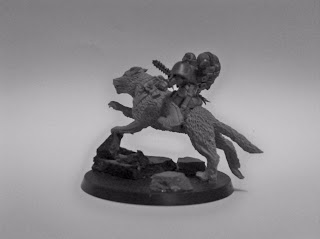 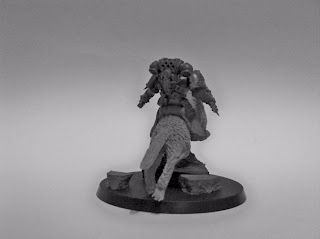 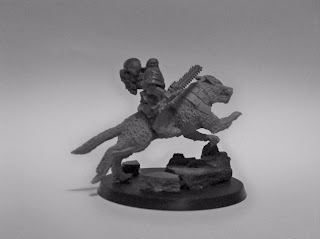 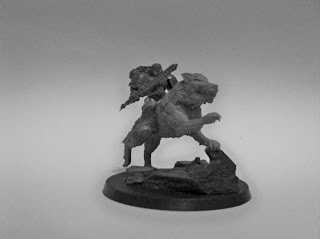 I also have a Thunder Hammer and Storm Shield model already assembled and undercoated (black, no magnets), but let's just say that there won't be any images of him until I've applied at least a base coat, 'cos pure black just don't photograph well!

So this leaves me with a complete unit of 3 cavalry, ready to accompany my Wolf Guard Battle Leader for the first time tomorrow for a 1500pt game vs Blood Angles at Walberton Wargamers. I'll be using a modified version of my Siege of Sussex list, loosing the pod, two priests and CML, and adding in these bad boys, plus a multi-melta landspeeder I've (nearly!) completed assembling. Less long ranged firepower, replaced by some mini-deathstar goodness and fast blocking/melta threat. Not a perfect list, but good for a fun game nonetheless!
Posted by Sentinel No comments:


Well I did it. First major goal of 2012 is complete - compete in my first ever tournament.

After only a few games getting back into 40k, I rather foolishly signed up to a one day GW tournament up at Warhammer World. Dubbed 'The Seige of Sussex'. there were 64 players per format for 40k and 16 for Fantasy, all from the GW stores in Worthing, Brighton, Crawley and Eastbourne. I'd be taking my Wolves for 40k, and was expecting to get hammered every game, but this was a chance that was too good to miss. Besides, there's nothing like jumping in the deep end to teach you how to swim!

I was told by the local shop manager, Matt, that there would be about three games using the BRB missions, all at 1500pts. I'll review my list development under a separate post, as that is a story in itself! Other requirements were a minimum three colour paint job (plus faces and hair), based and WYSIWYG. We knew that there were going to be soft scores for painting, but weren't told about sportsmanship (of course a high standard was expected anyway). I wasn't sure what the competition was going to be like, as the field could have ranged from a bunch of baby seals to the local elite (there are a few members of some of the linked blogs (like the Sons) that regularly go the Brighton Warlords tournaments and one nationally ranked player lives in my hometown nearby (Peter Cooke), so you never know!)! I was assuming a mix of youngsters and vets (without any big names), and was going with my game face on nonetheless!

I was really pleased to have been able to paint and base my pups to the required standard, although they definitely have a long way to go before they're finished. However, they with as much free time as I could carve out of my real life, it was good enough for the time being and looking cohesive as a whole, so I was happy.

Without going into specifics, my list had performed well over the 7 games I've played to date (I still can't believe I only played 7 games of 40k since getting back into gaming before going to a tournament. Crazy...). There are clearly a few improvements I'd make, but sticking with the same list gave me a good insight into what I could roughly expect my dudes to do, and didn't mean that I was wasting time painting stuff that I would later drop. There were also still a load of armies I hadn't played, so I was expecting to learn on the fly!

So what about your first ever tournament experiences? Do you have any wisdom or advice to impart to tournament newbs like myself? What are your best/worst memories of playing in a tournament?
Posted by Sentinel 2 comments:

The 'CONCEPTS:' series is intended to be a range of articles discussing certain commonly used (and sometimes misunderstood) terms and army building techniques, such as Balance, Redundancy and Duality. I think it's useful to establish a common framework for these concepts to help frame conversations, and also to help clarify my own thoughts on these matters. I have built up my understanding of these concepts from a large variety of different sources (many of which are listed under links!), and I certainly to not claim to be the originator of these various ideas!

Firstly, lets rule out some alternatives.

For me, balanced does not mean 'a large selection of different units chosen from a codex'. Often referred to as 'battleforce' or 'rainbow' armies, having an army with, for example, a squad of terminators, tactical marines, scouts, assault marines and devastators all lead by a captain may take a 'balance' of squads, but it is certainly not what we're looking at here.

In this context, it is also not 'avoiding taking too many of anything'. The antithesis of 'spam', I would expect that some players choose not to repeat particular elements at the risk of offending their opponent's or own idea of what would be realistic in a typical army of their choice. Examples of what this version of balance would try to avoid are 'missile-spam', 'razor-spam' and pure mech or footslogging armies. To a lesser extent this also rules out very characterful themed armies, like an all biker, deathwing or death company forces.

Neither is it necessarily 'having strong shooting, combat and movement abilities'. Whilst this is not ruled out in my understanding of balance, it is quite possible to achieve the criteria by focusing on one or two of these aspects. Of course, the best armies may well encompass all of these, but it is not always the case!

Before we get to my definition, a little background on my approach to gaming. I like the idea of having an army that can take on anything, whether it's going to be for a tournament or playing a friendly game against a random army. I also don't want to spend my limited time and money on stuff that never gets used, and I want to limit the number of games I get stomped just because of a 'bad matchup'!

All of which leads me to the following conclusion:

A truly balanced army is one that 'has enough tools in enough numbers to have a fighting chance against anything'.

What does that mean exactly?

To build an army that meets this requirement we need to understand not only what tools, or battlefield roles, need to be filled (e.g anti-infantry, anti-tank, threat ranges and scoring to name but a few), but also how our particular army/units/wargear work together to achieve this. Just one example would be if the best anti-infantry unit fills the same FOC slot as the best anti-tank unit, then there are some difficult decisions to make!

Creating a good balanced army is no easy task. Experienced or gifted players may grasp this straight away, but it should be possible for anyone willing to spend a little time and effort (like anyone reading this blog!) to persevere and improve their lists and gameplay.

So, food for thought then! Do you agree? How do you manage to balance your lists?
Posted by Sentinel No comments:

Email ThisBlogThis!Share to TwitterShare to FacebookShare to Pinterest
Labels: Concepts


So since I'm the new boy in town, I thought I should try to get to know my audience! I'm always interested in why people play. I'm assuming the answer will be 'for fun' for all of us, but what is fun?

Do you like to test yourself and your list building skills to the max? Are you an uber-competative type who likes to play tournament armies? Do blogs like YTTH and 3++ sound familiar?

Our perhaps you're a master painter or modeller? Countless layers of wet blending or hours with power tools and greenstuff your thing? Not adverse to a bit of colour theory? Sites like CMON get your vote?

Or maybe it's all about rolling dice with your mates, setting up that epic combat or bragging rights after a grudge match? Or crafting a gripping narrative, immersing yourself in a campaign, or writing your own fluff for your army? Warseer, Dakka, BOLS or B&C your thing?

Personally, I want to kick butt with an army of models I think are great, and have a good time doing it! So a strong mix of all of the above, I guess. Winning is great, but not everything, and I'd prefer a close game over a stomping. I love list writing and reading blogs, and now that I'm gaming again, want to get good enough to try my hand at some tournaments.

So how about it then guys? I have the feeling that when people play a game without agreeing on the focus, someone's gonna get burned! Or at least walk away with a stour taste in their mouth. Playing your super fluffy list against a tournament list? Good game!

Perhaps I'm wrong, and it doesn't happen at your club or with your mates. Maybe your group finds its own balance. Who knows! Anyway, I'd like to hear what you guy's think and what keeps you coming back for more!
Posted by Sentinel 3 comments:

Email ThisBlogThis!Share to TwitterShare to FacebookShare to Pinterest
Labels: Concepts


So, this is it! My first ever steps into the great blogoshpere! I intend this blog to be a place to record my development as a wargamer and hobbyist, as well as a handy place to find all the links to my favourite sites.

For those who are interested, I'm a returning gamer who's played a whole bunch of different games over the years, including 40k, Fantasy, Confrontation, MTG, D&D, Blood Bowl and Necromunda. I blame it all on Hero Quest for getting me hooked...

I've been collecting Space Wolves (again) for Warhammer 40k since late 2010, slowly painting them up and reading a lot of blogs, but it wasn't until early 2012 that I managed to get out of the house to play some games! I'm now gaming regularly at Walberton Wargamers and my local GW store in Worthing, and want to achieve two major milestones in my gaming career this year - firstly, to go to my first ever tournament and secondly, to finish painting an entire army up to 1500pts. Time will tell if I succeed!

I have no idea whether anyone will ever visit the site, but if you are here, then thank you for your interest and I hope that the blog gives you at least some food for thought!
Posted by Sentinel No comments: